Interview with Harry, director of Stig of the Dump

Interview with Harry, director of Stig of the Dump

Can you tell us a bit about you and your career so far?

I grew up in South London and I was born into quite a theatrical family – my dad was a sound designer and my mum did it all (acting, stage managing, directing, sound, lighting and so on). I went to the theatre a lot, so I grew up feeling like theatre was something that I could do and very much be a part of. I was very lucky in that respect.

I did a bit of acting as a kid, and then I trained at RADA when I was 18. When I graduated I had a career as an actor, but I always wanted to move into directing.

I came up to Storyhouse in 2017 to do Secret Seven as an actor and during that time, I had a conversation with Alex Clifton (Storyhouse’s previous Artistic Director), where I said that I would love to direct something at Storyhouse, and asked how I could get onto that ladder. He suggested that I interview to be his associate on The Tempest for Grosvenor Park Open Air Theatre. I got that job and it was an incredible experience because Alex was very generous and gave me a lot of time to run the room. Since then, I’ve worked as an associate for other companies as well, and I’ve done bits of directing in my own right. Directing Stig of the Dump is my first time directing a show for the park on my own, which is great!

What do you most enjoy about creating theatre for this unique outdoor space?

It’s the challenges that it comes with. It’s fact that it’s outside and you’re competing with the weather and noise, and also the fact that it’s in the round. There are a lot of challenges that you are immediately faced with, so there’s always a lot to be thinking about. As the director, you have to make sure that, at all times, you are directing the show for a 360 degree audience.

The other thing that’s amazing about the Park is that the people of Chester love it and you can feel that energy in the audience. You can feel that everyone is really excited and keen to show up and enjoy themselves!

Tell us about making the characters of Barney and Stig Deaf?

It’s a story about friendship and communication and in Jess’s version Stig and Barney communicate in a very unique way.

Chris Fonseca, who I call my theatre husband and who is my associate director on this, is profoundly Deaf and I am a fluent BSL user and so we are always very passionate about including Deaf people in all of our work, and making sure that it is as accessible as possible.

Chris Fonseca and I (and another actor friend of ours called Nadine Islam) produce these events called A Night in Sign which are theatrical cabaret events, where all of the performers are deaf or hard of hearing. We came up and did one of these events at Storyhouse and it went really well, and from there, Helen asked me to direct Stig of the Dump for the Park.

The show is BSL integrated, so it has sign language throughout. We have an on-stage sign language interpreter Laura Goulden, but the idea is not to use her all of the time. We want to make sure the show is as visual as possible, so people, whether they are hearing or Deaf, can understand the show at the same time in a visual and physical way. 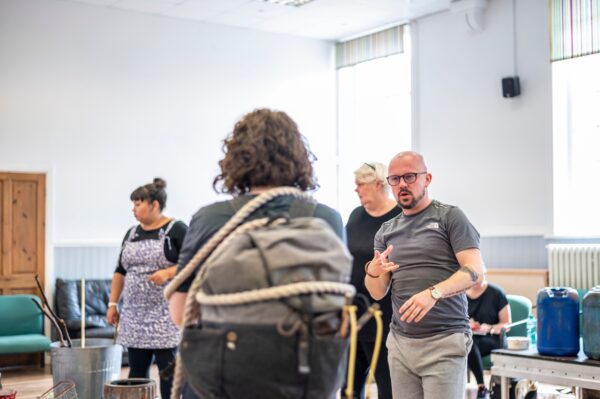 How do you approach the rehearsal process – how important is collaboration?

I actually have the sign for collaboration tattooed on my right arm! I am all about collaborating and I think that it is the only way to make work. I think it’s foolish not to use everyone’s input.

We started on the first day by doing a physical communication workshop, because I think it’s really key for this show that everyone gets out of their heads and into their bodies and starts to explore the script physically and think about how you can communicate a message physically, because actually we do that all the time in life!

I think that when someone is Deaf and there is a language barrier, hearing people freeze and they go “oh I don’t know how to sign so I don’t know how to communicate”, but actually, we do if we just try! It is so amazing to see now that everyone is really trying, we’ve already got actors picking up huge amounts of sign and communicating physically in the tea breaks and lunch breaks. We don’t have to be scared to communicate with people who have a different language to us. We just have to have a little more confidence to try – amazing things can happen!

Book tickets for Stig of the Dump here.